Vertical cracks can be found on nearly every slab or basement foundation. Just because they are common, though, doesn't mean that they should be ignored.

Vertical cracks are not necessarily perfectly vertical. A vertical crack is generally defined as any crack that runs roughly upward at 90 degrees from the ground, but the crack can slant up to 30 percent off of 90 degrees to the ground. Anything variance that is greater than 90 degrees is considered a diagonal crack and requires a different assessment and repair plan compared to vertical cracks.

The crack may be very narrow, which is defined as a hairline crack, or it may gap open slightly. It is also possible for the crack to gap more widely at one end compared to the other. Vertical cracks tend to form in the first few years following construction, but in some cases, they may form on older foundations.

Nearly all vertical cracks are caused by tension on the concrete, which is why they appear during the initial years after the home is constructed. Tension exerted on the foundation from the outside soil causes the cracks to form in order to relieve the tension. The cracks aren't actually damage so much as naturally occurring tension relief joints that prevent more extreme damages to the foundation later.

Fortunately, vertical cracks are easily repaired. The best course of action is to fill and patch over the cracks. Hairline and narrow cracks can be covered with an epoxy patch to keep moisture from seeping in. Wider cracks are first filled with a flexible epoxy, which allows for the tension relieving movement in the crack, and then covered with a patch to prevent water incursion.

If the cracks have formed on an older foundation in response to water pressure, your foundation repair team will first determine why the pressure has increased. You may need to have ground drains or grading done to prevent water pressure against the foundation. They will then patch the crack as detailed above.

Contact a cracked foundation repair service for more help if you notice vertical cracks on your foundation. 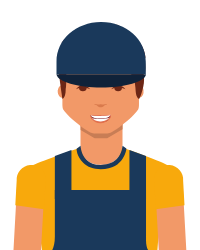 Tile Grout Issues And Solutions
12 May 2021
Old grout on your tile floors can begin to look worn out and tired due to mildew growth, stains, and cracking. Removing the floors just to replace the …

Water Damage Restorations Guide To Quickly Get Water Cleaned Up And Begin Repairs
26 April 2021
Has your home recently been affected by a water damage issue? If so, there are repairs that you want to get started with quickly. Before you can begin …

Broken Microwave? It Might Be Fixable
21 April 2021
In past years, microwaves were mostly small, countertop appliances. They did not cost very much, so when they stopped working, people generally just t …